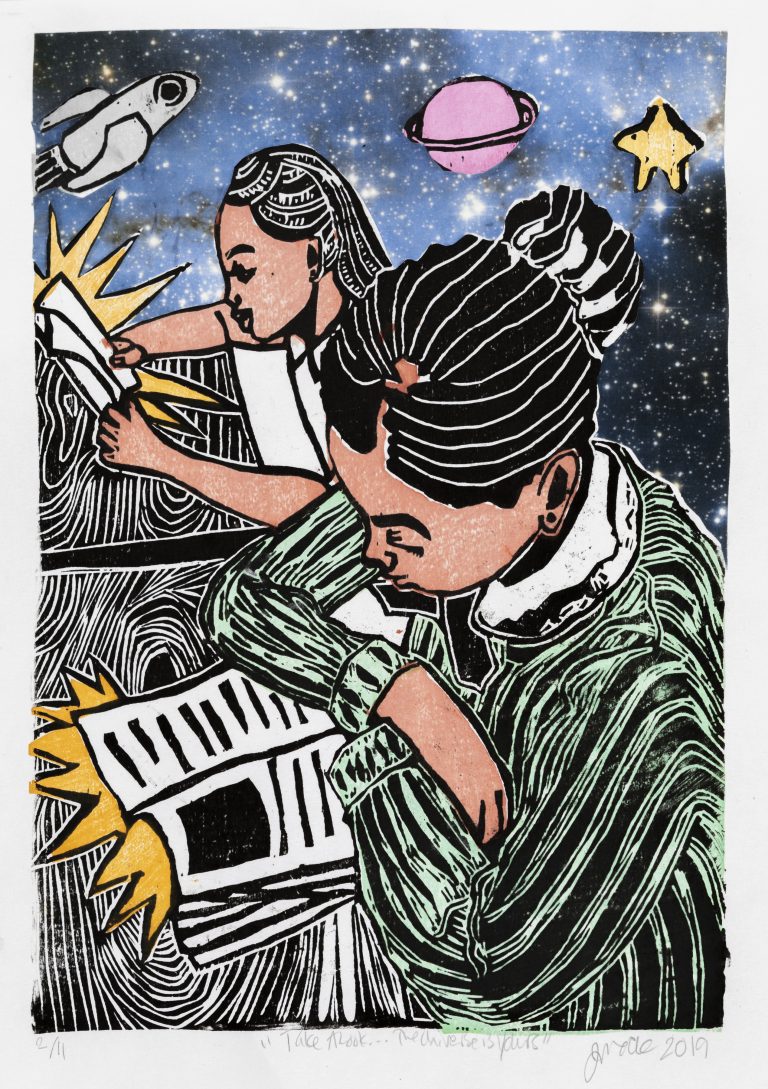 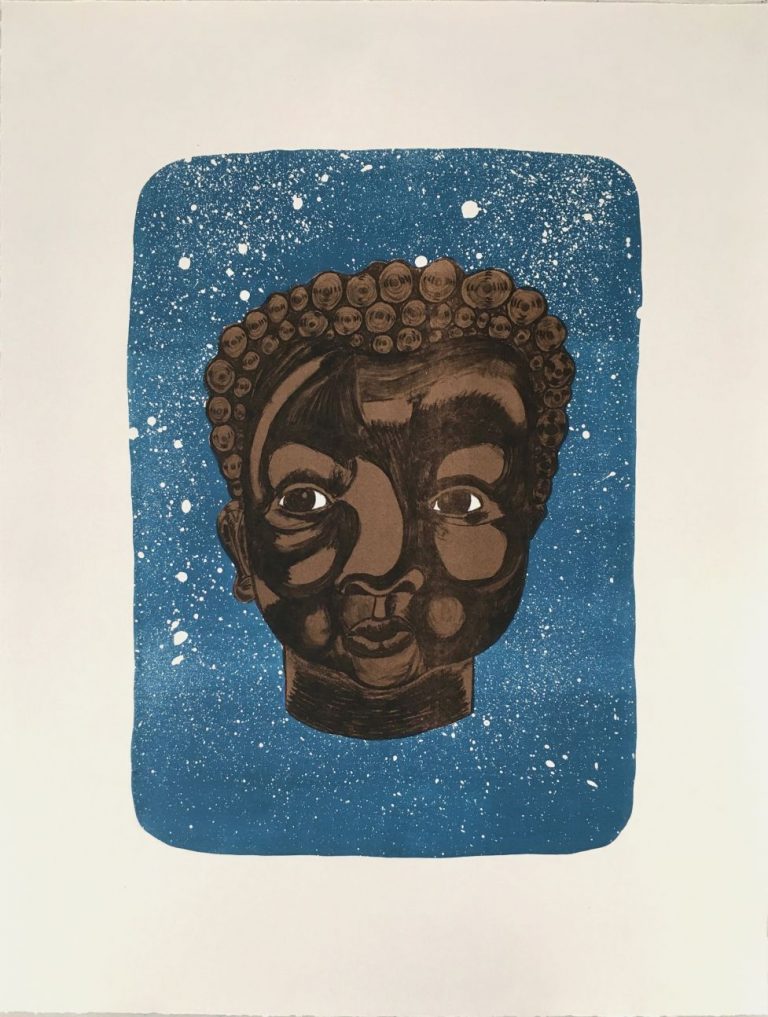 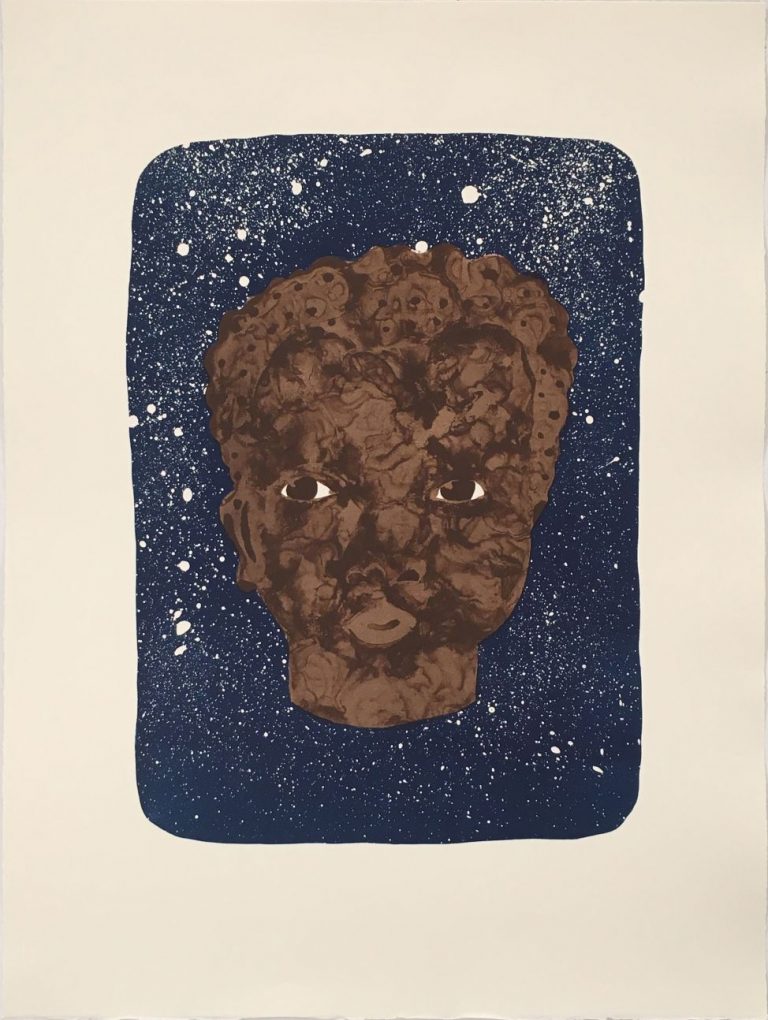 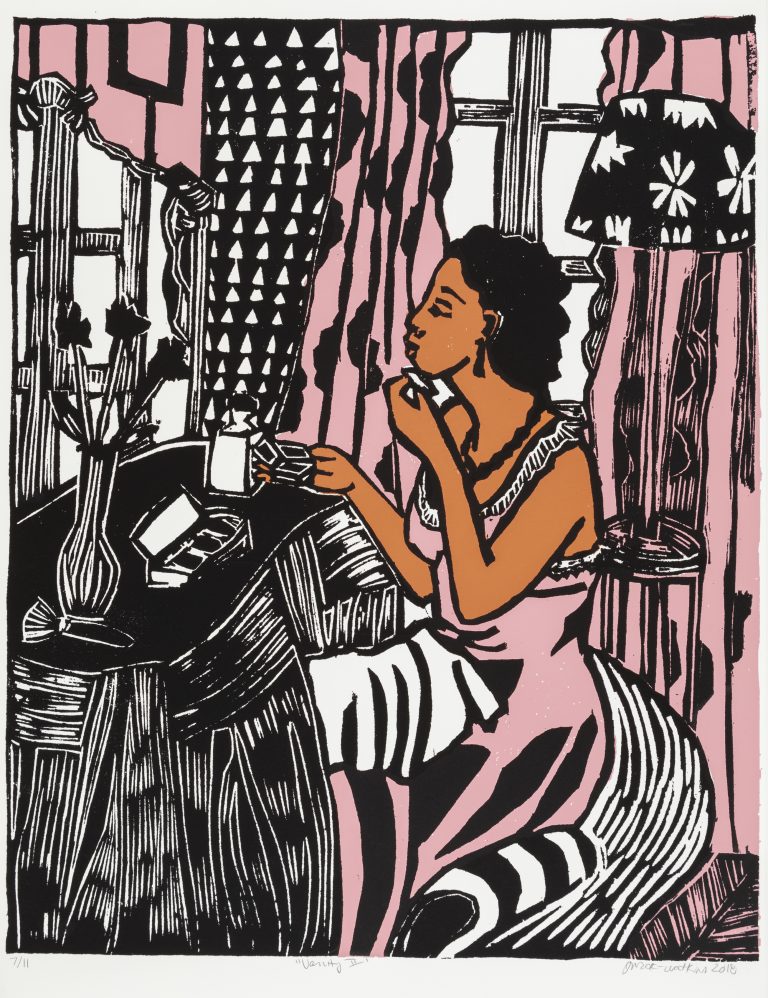 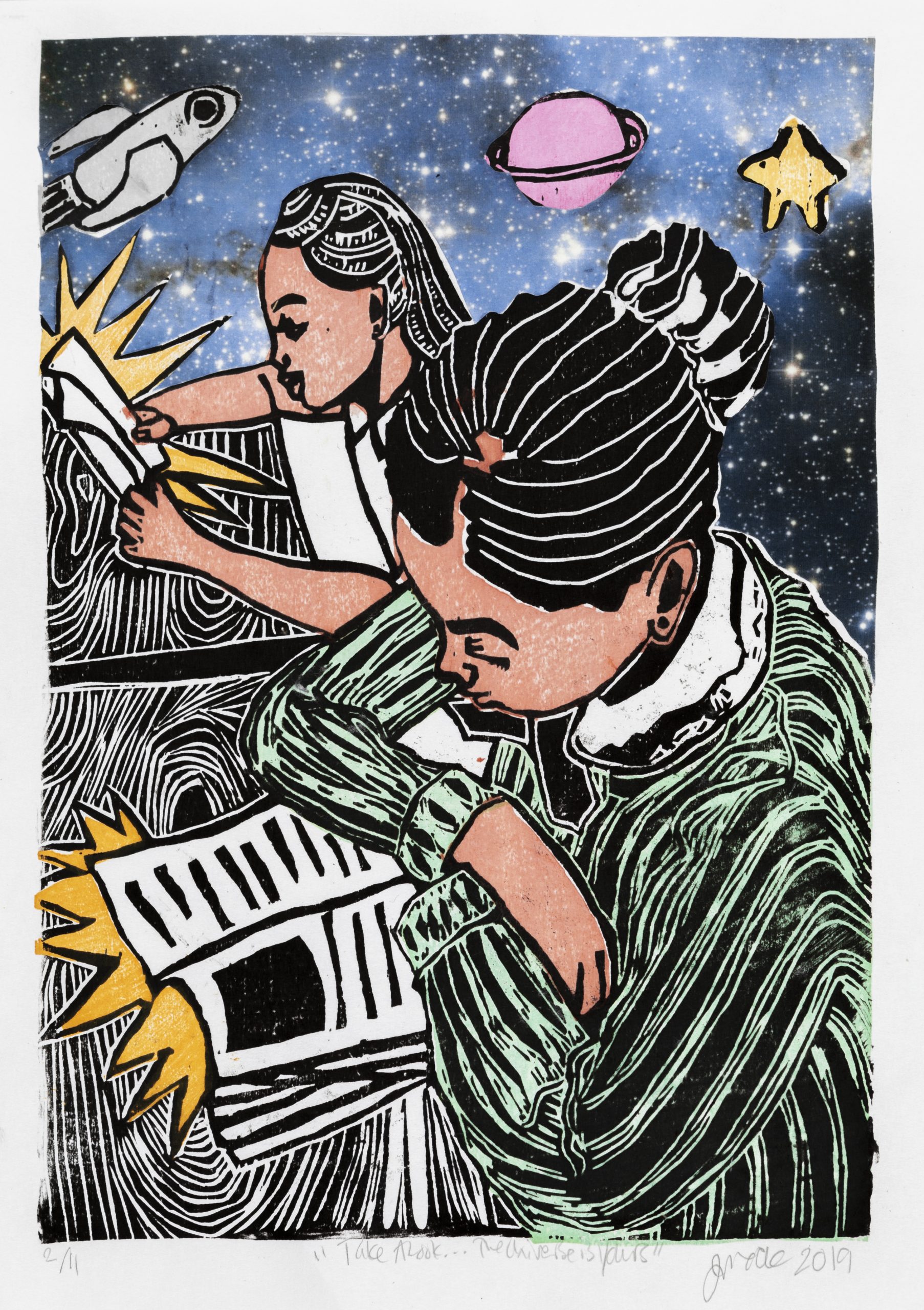 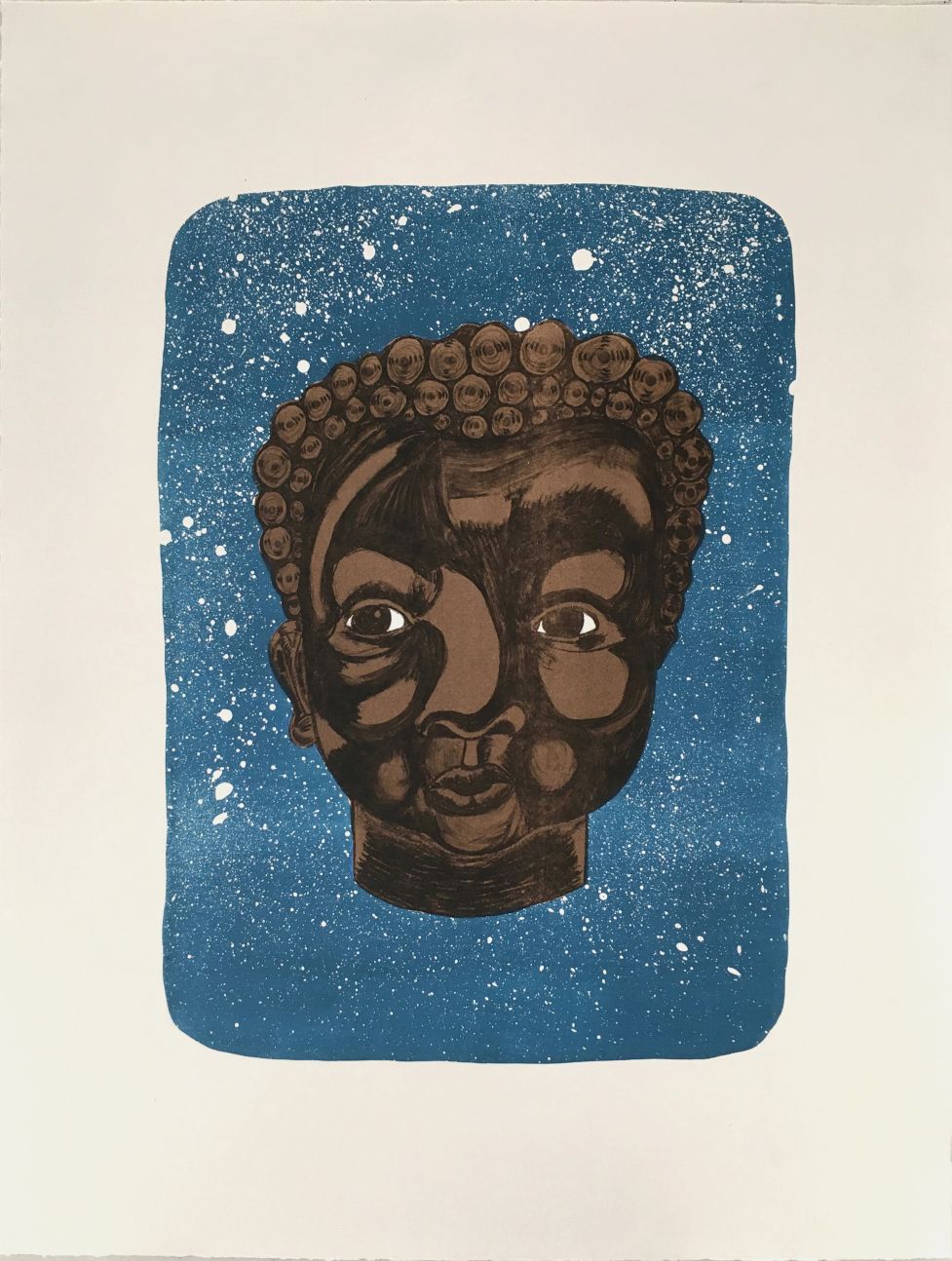 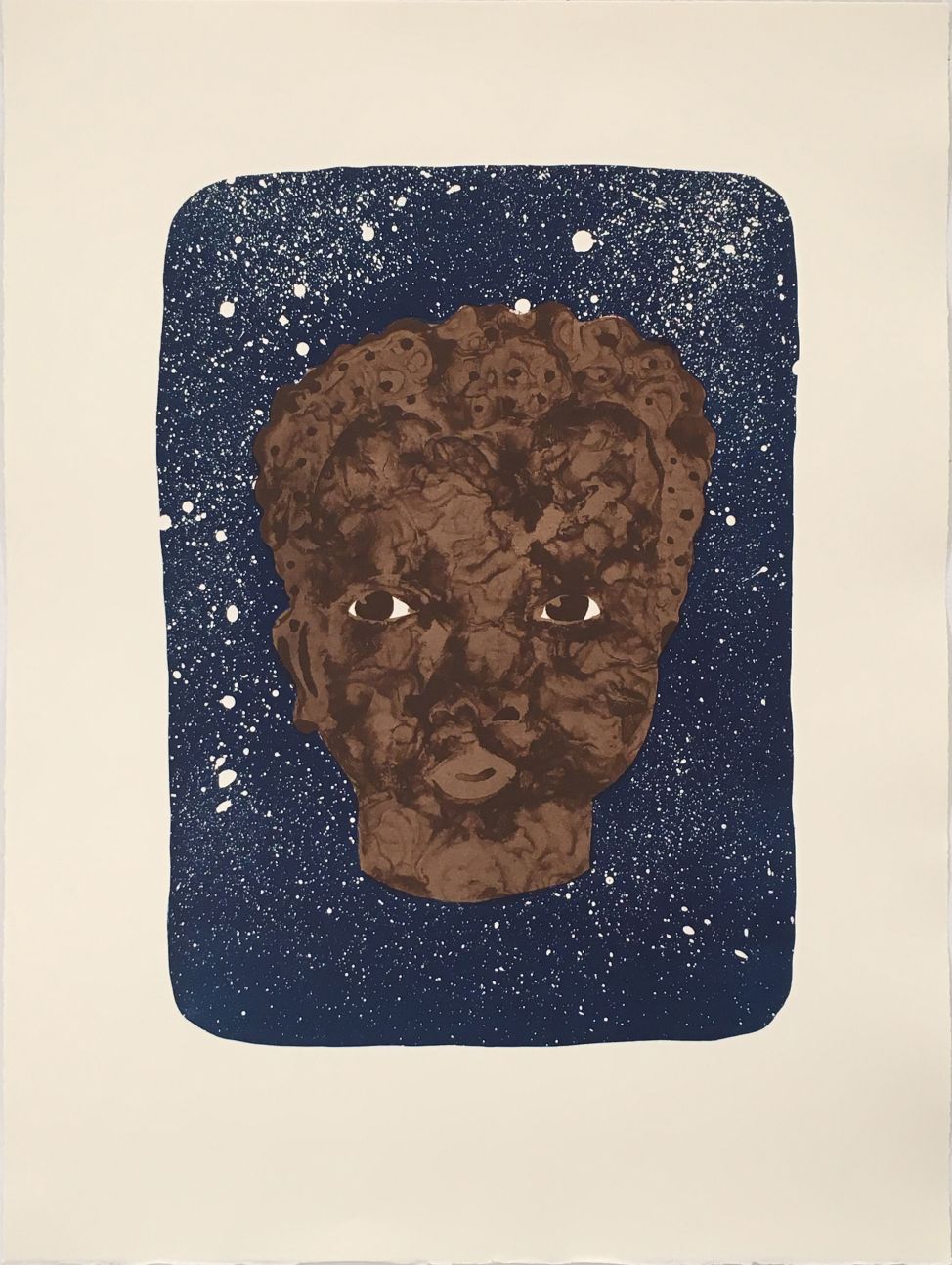 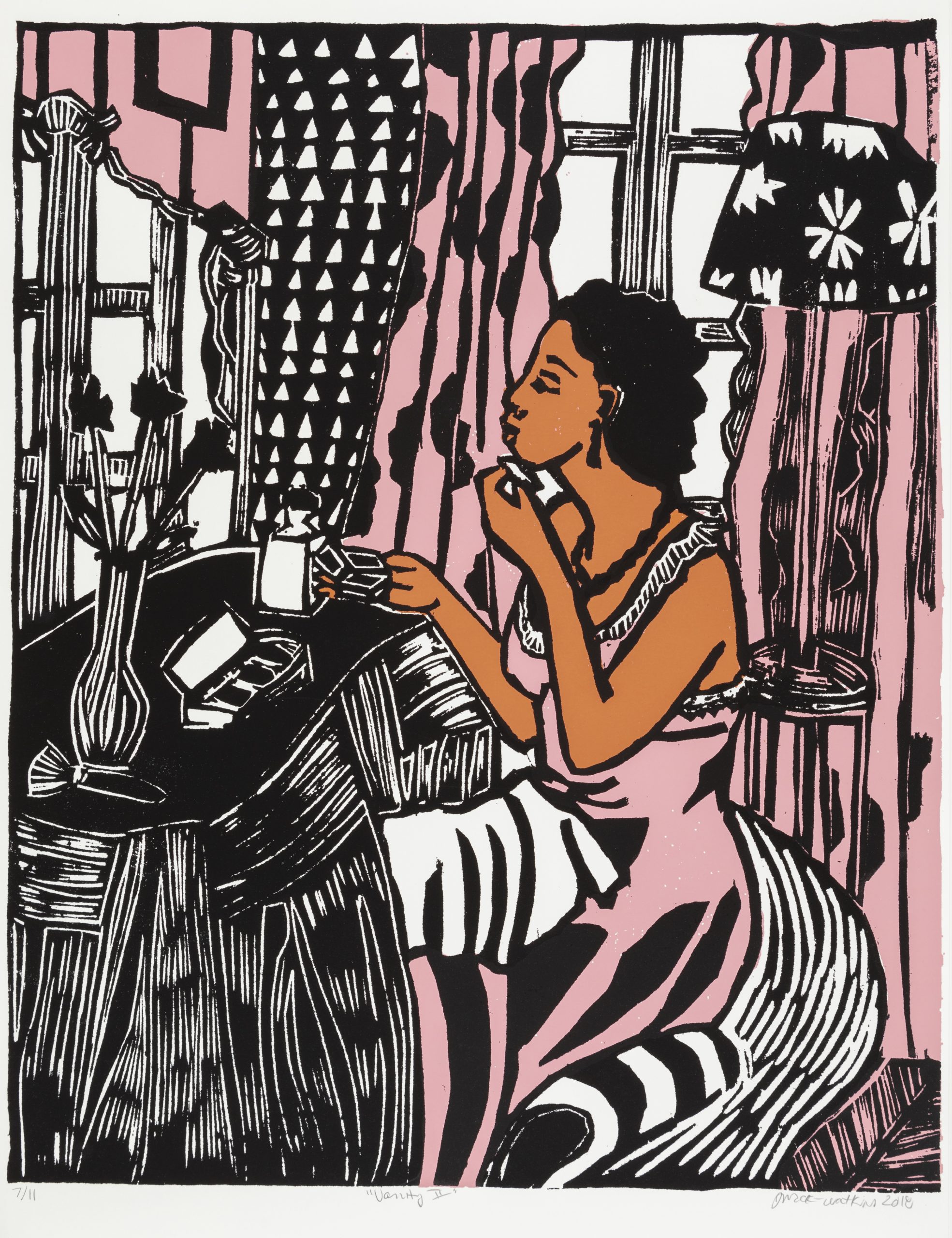 Black Boy Hope I and II

June 16th, 1944 an African American 14-year-old boy, George Stinney, was wrongly accused of murder and became the youngest child executed in the United States in the 20th century. The work titled “Black Boy Hope” depicts a bright future that is hoped for all African American children growing up in the United States of America. As an act of resilience, the subject has the freedom to be joyful, great, and can determine his own future without biases or stereotypes. The print is composed of various visible layers that represent the everyday experiences of African Americans as victims who have continued to be racially targeted historically both past and present. This work will accompany the upcoming print exhibition “Children of The Sun” that will be exhibited for the first time at The Brattleboro Museum, Vermont in March 2021.

“Take A Look… The Universe Is Yours!”

The Japanese woodcut print, titled “Take A Look…The Universe is Yours” is inspired by the early 80’s Television show’s theme song “Reading Rainbow”. Similar to the show, hosted by Levar Burton, the main purpose of this particular work is to motivate girls to have the desire to read and study the sciences.

Children of The Sun Series (Langston and Harriet)

These prints are part of an ongoing body of work that celebrates the beauty, importance, and complexity of the positive representation of African American children. The work is delicate, expressive, and examines the ideas of oral history, memory, literature, and resilience. These elements influence both an internal and external vision of and for ourselves. Drawing from the illustrative imagery found in the 1920’s literary magazines it uses the medium of printmaking to mirror the genre-bending literary approach taken by its editors to display positive imagery of African American children. Together this body of work weaves imagery and narratives from disparate sources: accounts from Vermont storyteller, poet, and activist Daisy Turner of her childhood stand against racism. Each doll is given the role to become part of the future with the space elements embracing it as not just the background, but also as a source of self-motivation. These works will be exhibited for the first time at Mack-Watkins’s first solo empower while also on exhibit at the Brattleboro Museum in Vermont, March 2021.